Citations per year. Duplicate citations. The following articles are merged in Scholar. Their combined citations are counted only for the first article. Merged citations. This "Cited by" count includes citations to the following articles in Scholar. Add co-authors Co-authors. Upload PDF. Follow this author. New articles by this author. Ground colour light orange-brown with distinctive black markings. Head seems all black, inner part of complex eye lighter. Antennae orange-brown. Mesoscutum with four black patches, plus one black patch in front of scutellum and one at base of forewing probably part of tegula.

At least posterior half or entire T1 black except light orange-brown base and narrow band along apex; T3 and T4 each with two lateral black patches; dorsal part of last tergites dark. Ovipositor black, its sheaths orange-brown. Head with antenna 1.

Other titles from the series : Memoirs American Entomological Institute

Eye large, gena very narrow; inner margin of eyes probably more or less parallel. Two unidentate mandibles might be discernible. Mesoscutum with notauli deeply impressed anterior but their length unclear. Sutures weak or invisible, except for side of mesoscutum. Subtegular ridge indicated. Epicnemical carina distinct below but unclear how far up. Propodeum around as long as high, possibly with closed petiolar area and additional carinae but interpretation uncertain.

The Genera of Ichneumonidae, Part 1

B Drawing; fore and hind wing were separated in the drawing; dashed lines indicate uncertain interpretations, black arrow indicates mesoscutum. C Details of the mesoscutum rugose sculpture. Lateral aspect of body with incomplete antennae, complete fore and hind wing, incomplete legs and incomplete ovipositor; parts of mesosoma and metasoma missing. The fossil originates from the former collection Behnke, details concerning digging site and horizon are unknown. Based on the rugose mesoscutum, long ovipositor and very short hind wing vein 1Cu, the specimen can firmly be placed in the subfamily Rhyssinae as tribe Rhyssini in [ 2 ].

Considering the strongly petiolate areolet, the best fit is within the genus Rhyssella Rohwer or Cyrtorhyssa Baltazar.


Mandibulae stout, bi-dentate. The fossil differs from most of the extant Rhyssella species in the less slender cell 2R1 and different shape of cell 2M, with vein 1m-cu shorter and not curved at the base in the extant R. Antennae and wing veins dark brown to black. Legs of similar colour as most of body; fore and mid leg femur and tibia lighter. Ovipositor and its sheaths black.

Head with antennae incomplete, at least 12 flagellomeres visible; first flagellomere 3. One mandible present, stout and with two teeth of more or less same thickness; surface of mandible with strong punctures, separated by less than their diameter. Malar space around 0. Mesoscutum with some transversal rugae visible especially in posterior half; indication of notauli might be present.

Pronotum about as high as long. Epicnemical carina extending at least until mid-height of pronotum, not clear if curving anteriorly. Propodeum short, only partly preserved.

The genera of Ichneumonidae, Part 2 | Field Guide and Catalogues

Metasomal T1 1. Ovipositor with incomplete tip, long and straight, at least around 1. Subfamily Labeninae Ashmead, [ 62 ]. The coxal insertions in the same plane as the metasomal insertion would point to Labenini [ 63 ], but the interpretation of this character is somewhat uncertain and thus we refrain from a tribal placement.


Vein 3Cu is never missing in any of the extant genera of the subfamily [ 2 ] although this is frequent in the subfamily Ophioninae ; we thus place the fossil in a newly described genus. Areolet pentagonal and around 2x as long as wide; vein 3Cu absent, 2M cell thus triangular. Metasoma attached to mesoscutum clearly higher than coxae; coxal insertions almost in same plane with metasoma attachment point. Ovipositor around as long as forewing or longer.

Hind wing with vein 1Cu slightly longer than cu-a; 1Rs longer than rs-m. Named after the Japanese spider crab genus Macrocheira ; the fossil resembles these crabs with its very long and spread hind legs. Dorsolateral aspect of body with incomplete antennae, fore and hind wings, hind legs with parts of tarsi and parts of mid legs; mesosoma and metasoma preserved without any details. 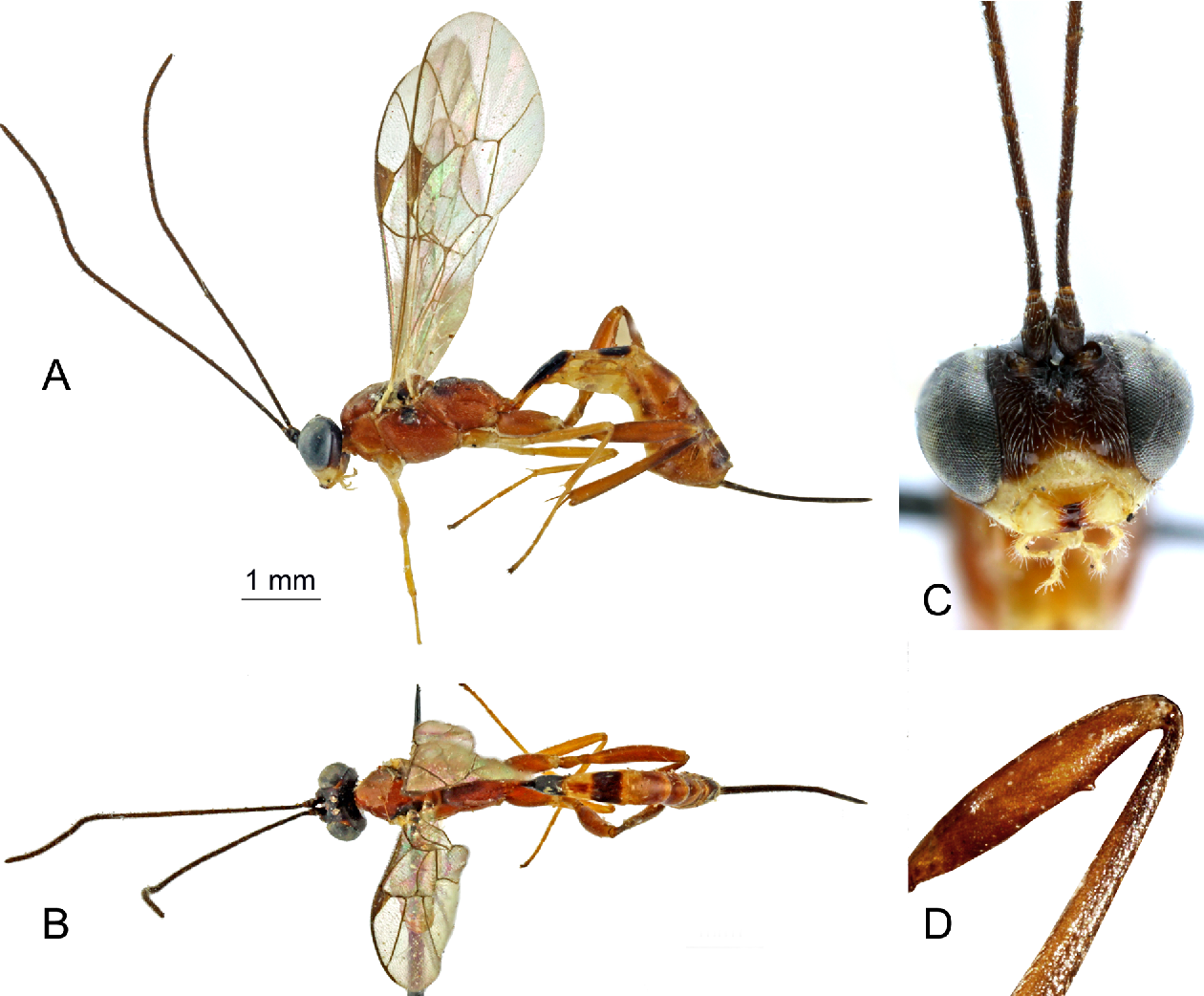 Related The Genera of Ichneumonidae